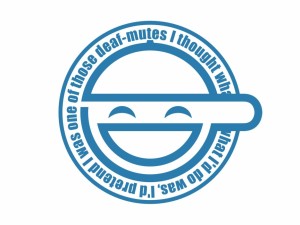 Last weekend I was up in Ayr at the local branch of HMV.  HMV has taken a dive in terms of quality in the last few years and choice also (I mean why would a music/video/game store devote 25% of its rack space to headphones of all kinds at the expense of a wider choice of music?) but that is not the point of this post.  Among the piles of films I came across the anime section and  therein some heavily discounted titles.  I really like most things Japanese and anime especially as it gives me ideas for wargaming.  So I had a dig and bought three movies that were down to two pounds each.  I will review each of them but I am limited to watching one a week really and I just finished watching ‘The Laughing Man’ now (got up early to do it when the house was quiet).  Now on with the first review!

Japan, 2030. Modern technology has reached great heights, but crime still plagues human society—and that’s when cyborg operative Motoko Kusanagi and the elite squad of Section 9 step in. Armed with the latest hardware and software, they follow the trail of the Laughing Man, a mysterious criminal who committed various acts of corporate terrorism six years ago and then disappeared. Now it seems that he has returned, hacking his way into people’s brains and turning them into puppets of vigilante justice. But how do you track down a criminal so brilliant that he can wipe people’s memories and leave only a laughing face as his calling card? The clues will lead Kusanagi and Section 9 to a conspiracy spanning the worlds of medicine, technology, and even the highest levels of government. 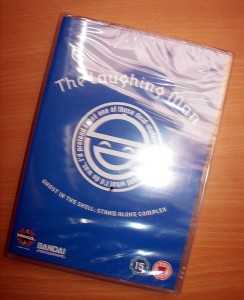 I watched the film BEFORE looking it up online.  This is important as I like to view video and listen to audio, indeed read too, without others opinions in my head.  GITS Laughing Man is a long story running to 154 minutes which is way longer than the typical hour and a half.  The story is very interesting and the quality of the animation and rendering is top notch.  A special mention of the music too which was composed for the tale and is so good that I would listen to it on its own.   The plot concerns a group of characters hunting down the elusive ‘laughing man’ LM who can interfere at will with a person’s ‘cyberbrain’ and turn them into an automaton with a single driven purpose.  At times you doubt the LM even exists and there are copycats how try to be him as well.  As the film continues the pace of action does too and complex issues of humanity and machine integration as well as identity in an age of digital immortality are raised.  I enjoyed the discussion but I also liked how this discussion was dropped each time when the need for gun play came.  What stands out for me are several scenes in which a crowd of people are ‘infected’ and some of them come under the control of LM and attack the present politicians and security agents.  I will not spoil the film for those who wish to watch it but it is slick, well paced and has a rather surprising ending.  Well worth it.

Once I had finished watching the film I looked it up online and found out (I have never seen any Ghost in the Shell or this would have been obvious) that this film is actually condensed from an entire series of episodes of the TV show!  If I had bought the series I would have been annoyed at this but since I did not then it was fine and it did explain why at points city seasons and costumes changed in moments.  Some commentators did not like the voice acting for some characters.  I watched it in Japanese with English sub-titles so I cannot comment on that.  All the reviews I have read beyond the point about condensing a series into a movie are all positive and I agree with them.  This is easy accessible to a western audience unlike some other anime.

In terms of wargaming potential this anime has enough to keep sci-fi and cyberpunk fans busy for a year.  There are a half dozen scenarios in the gun fights alone and the plot has many points for ‘jumping off’ in a different direction or setting with the ideas given especially with the ‘hacked cyberbrain’ idea.  I think it is well suited to HOF Fire Team as most of the conflict takes place in a dense urban environment.  Do not be surprised if some of this pops up in my work for Barking Irons Online!

One last mention must be made of the logo that is on the cover of the box and the top of this post too.  It pops up all through the film blocking your view of the face of those under the control of LM and it is every effective because for all their advancements none of the ‘enhanced’ characters can see the LM as their cyberbrains prevent it.  Only a homeless alcoholic sees LM as he runs away as he is not enchanced leading to a vital clue.  I fancy getting a t-shirt with the logo.

Overall I would highly recommend this movie to all fans of the genre.  Excellent value and full of plot and pace.