So here we are on an intermittently wet and sunny Sunday in late June.  I had been working on a project and then I remembered that today was Girvan’s Gig on  the Green!

The family headed out to have a look.  Actually I could hear it soon after going out, as we live quite near Stair Park which is where the stage was set up.   I have to say that I was unaware that today was also parade day in Girvan where civic week begins with a procession though the town with lots of people dressed up (this year was an Olympic theme…duh!) but I ran into the parade on the way to the park.  It had only just begun but we snapped a quick picture as it went by led by a piper and with the rear brought up by characters including Super Mario and I think Postman Pat (the kids were very taken with this).  More people joined it as I watched and though we were waved at to join I could hear an electric guitar so no chance of that and off we went. 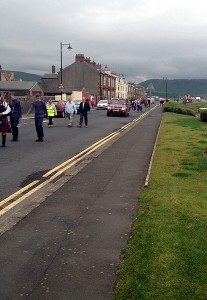 Stair Park is in the rear of the above picture so it was not much of a walk to reach the park.  Below you can see a lot of what was laid out in the park including the main stage, several inflatable slides, a bucking bronco, a really lovely and brand new climbing wall along with a lot of stands selling refreshments and also offering face painting, flag making, puppets, balloon modelling and the like. I think there was a couple of hundred people there but it was early as Gig on the Green goes on from noon until after eight in the evening and this was about half past two. 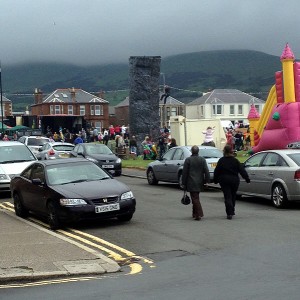 The Crowd gathers under the Clouds

The weather kept changing from bright sunlight to dark and moody grey light.  If you look at the rear of the above image you will see why.  Something Scotland is well known for; low laying mist.  The picture does not do the colour justice as it is ominous and beautiful both sitting right atop the Carrick Hills. 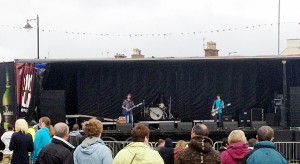 I have been to several of the Gigs on the Green in previous years and this year the sound quality on the stage was excellent, no feedback or other haze to interrupt it.  The stage is a purpose built truck trailer with its own power supply and such and it makes a big difference to the performers.  I watched and listen to a good few tunes until the kids got fed up and dragged me away.  The line up included Counselled Out and Escapade but I think I saw Audio Juice (Girvan band in the picture) but in eight hours of live music more than seven bands were listed to perform.

So i was a good couple of hours out for me and I enjoyed it but it was let down by two things I feel.  The first is the weather which is always a risk in Ayrshire as it can be VERY wet and we have had several inches of rain in the last couple of days, but it did stay dry if dark.  Secondly I just cannot help but think that Girvan would get on a lot better that these great little events if they were better advertised.  Not nationally but locally in Ayrshire.  As I said I go to a lot of the events but I was barely aware of it; and I live here!  Perhaps a full page in the weekly paper with a big advert for it, including a free parking notice (as the whole town is) and a tie in with local retailers to offer special incentives on food, drink and other things might do the trick.