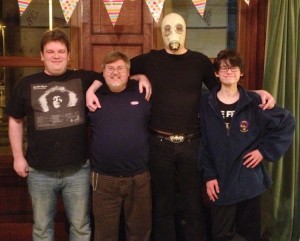 It has taken me a wee while to get to this posting here due to work commitments (I am only one Man damn it!) but I wanted to tell you all about a visit of several days that I had been looking forward to from my good friend in America Bob McAlister and his family.  During a visit to Scotland last week the jolly three came by and spent a few days here in Girvan.  A good time was had by all and several field trips undertaken as well.  Bob had sent me a package last year which I posted about and I took the chance to repay him by a filling with beer at the Roxy Pub here in Girvan and getting him hooked on Irn-Bru.

While he was here Bob and I played out the Typhon demo scenario for Salute 2013 on a cut down sized playing area and yes I won but only just.  It was a close call.  Below you can see Bob and I talking shop before play commenced.  Typhon is a super game for a visual experience and my Droves of Shades gave a powerful account of themselves against Tyro and her Cyclopes too. 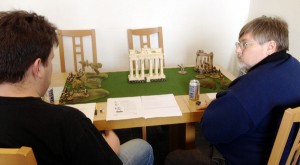 Getting ready to Play Typhon. Bob is the handsome fellow on the right!

During our excursion to Glasgow we visited Static Games and I picked up a stack of second hand books and magazines including some very early White Dwarf issues.   If time allows I will post on these later in the month.

Bob and his family were delightful company and we all missed them when they left.  The world can seem a large place but really in these days of jet travel, skype, email, facebook and more its not so big after all.