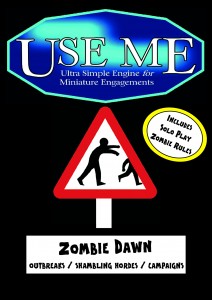 I wanted to do a quick shout out about one of my own titles from the highly successful USEME series of Wargaming Titles; UM009 USEME Zombie Dawn.  It is now back in print after a gap of a couple of months and I am greatly pleased to be able to say that its second print run is larger than the first.  At the weekend I went to see World War Z at the cinema which was good but the book version (rather different…well actually REALLY different to the film) was what was in my mind while I wrote this title a couple of years ago.  It was actually down right funny to see Glasgow portrayed as Philadelphia in the film.  St Georges Square is very familiar to me and with its, as far as I know, unique bright red tarmac surface it looked sod all like America!  🙂

The 2nd print run features only an update to the listing of top sources for inspiration and an update to the list of available titles on its last page.  When the book went to print originally its ninth position on the list was the end of the list but now it goes up to number fifteen and Zombie Dawn is nearing the middle of the listing of titles.  More on the new titles when the time comes.

Because of the new movie being at cinema’s now I asked for and got permission to put up a special ‘Z Deal’ this week.  So until Monday of next week you can go to 15mm.co.uk and get a print copy of UM009 and a pack of 15mm Zombies (sixteen of them) for just 6.25GBP saving thirty percent off list.  Excellent eh!