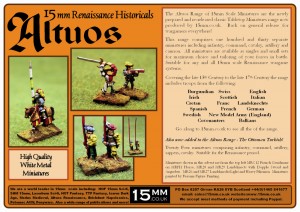 It is that time again.  A wee bit of graphic design to create an advert for the August 2012 Issue of Miniatures Wargames magazine.   I used the same basic shape and template that I did the Issue 351 or July issue but the subject matter is rather different.  This time the whole Altuos range of 15mm Renaissance Historicals gets the glossy treatment that it has so long deserved.  Expect to see this one in the shops in a few weeks time at most.  Click on it to see it larger.

Some people have told me that magazine advertising in the wargaming industry is as dead as a dodo since everyone now only wants to look at blogs and online groups for their news and ideas.  Perhaps this is so but we will find out.  Some of those same people have said that one of the worst ideas is to advertise something as unfashionable as 15th to 17th century historicals but lets just say that I not only have faith in this superb range brought back from dusty ruin but also that I like a challenge.  I have done my best so it will be up to MW and Andrew Hubback to see if 15mm.co.uk will see a return on this advert.

But its not all about money, far from it.  These are super miniatures and they were for the most part VERY popular in the 1980’s.  While part of the range has been re-released for some time I have not gotten around to the rest of it but knowing this advert is steaming towards the presses will make me hurry up!  To that end expect a posting on this very blog about inky hands and a load of photos of 17th century figures and artillery real soon.

6 thoughts on “An Advert for MW352 Magazine”